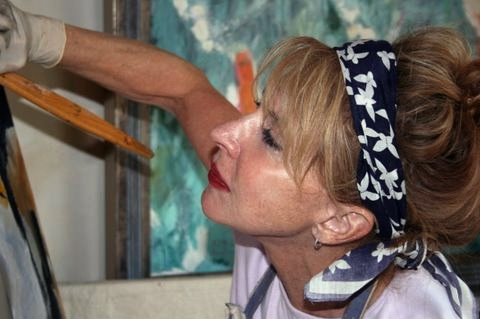 Mardi de Veuve Alexis is a California abstract artist born and raised in the San Francisco Bay area. While she grew up in a family of artists, she began seriously studying art and design after a temporary move to Alexandria, VA in the 1980s, where she took classes at the Torpedo Factory Art Center and in Washington D.C. at the Corcoran School of Art. Upon returning to California, she studied at the University of California Los Angeles (UCLA) at the School of Architecture and Interior Design. Mardi has been painting professionally for fifteen years, experimenting with combinations of various media and textural effects, mixing charcoal, ink, pastel, acrylics and collage. Her current body of work is inspired by urbanism and street art incorporating contemporary modes of communication like graffiti in an urban environment. A frequent international traveller, her work is inspired by cultural diversity and her interpretation of the human condition and the global environment.   Mardi’s paintings and drawings have been shown and collected throughout California, Texas, Stockholm, Sweden; Croatia; Belgrade, Serbia; and Puerto Vallarta, Mexico.

Collage, mixed media, line and textural effects characterize Mardi’s current body of work on canvas, panel and paper that is largely focused on urbanism and aerial landscapes. She is a member of Los Angeles Art Association; the Artist Council of the Palm Springs Art Museum; a member of the Morongo Basin Cultural Arts Council; a member of the Laguna Beavh ART Group,  New York ART Group, La Quinta Arts Foundation, an active Member of Women Painters West and an Exhibiting Member of California Art League, and of the Joshua Tree Art Gallery and Gallery 62.  Mardi is represented by the Izen Miller Gallery in Palm Desert, California.

“Artistic Expressions of the Coachella Valley”

Curated by the City of Palm Springs Public Arts Commission